This article was originally published in the ML4 Foundation e-newsletter, August 2017 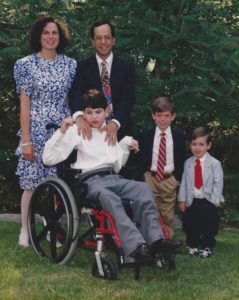 The Wien family pictured on the occasion of Brian's bar mitzvah

When Nannette Wien first heard about brain and tissue donation several years ago, she immediately felt an urgency to learn more about this process. "I sensed this was something important we could do to help ML4 science," explained Nannette, whom husband Mike beamingly calls "the real champion" of the whole process. The Wiens' beloved son, Brian, who passed away on May 25, 2017 at 36 years of age, was one of the oldest known individuals with Mucolipidosis Type IV. Mike shared: "When he was first diagnosed, they knew so little, they told us not to expect to see his fifth birthday. Then they said, don't expect to see his tenth. So, after a while, we just learned to have no expectations with Brian. He exceeded every expectation. Even in death."

Why Do Scientists Need Human Tissue?

After learning that parents can donate brain and tissue to biobanks after a child's passing, Nannette and Mike Wien took the courageous steps to learn more. The Wiens contacted the NIH-supported Maryland Brain and Tissue Bank, otherwise known as the UMB BTB.  Biobanks are scientific repositories that meticulously store organs and prepare them for scientific disease research. The UMB BTB biobank is specifically designed to help advance research in neurological disorders like ML4. Many technologies can provide insight in neurological disease research. MRI, for instance, is commonly used to view the brain of patients living with a disease. While enormously helpful, the contrast with studying human tissue from deceased patients is startling: one could say that MRI data is like viewing a Google map from a satellite looking down to earth, while viewing human tissue from a biobank is akin to viewing a Google map at the street level. Examining human tissue is 1000-fold more detailed than examining MRI data. Certain discoveries simply cannot be made without access to this level of detail.

A Lifetime of Dedication to MLIV Research, Forever Continued

The Wiens have long been involved in the MLIV research community. Nannette was one of the first parents to take Brian to the NIH to participate in natural history research, and Mike recently ran the Boston Marathon to raise funds for the University of Pennsylvania Orphan Disease Center Research program for research in ML4 science. Both parents have been active in the ML4 Researcher and Family Conferences where they have shared knowledge about Brian with scientists and families alike. Indeed, it was at this conference where Nannette first heard about the option of donating Brian's tissues to science.

Their decision toward the end of Brian's life to contact the UMB BTB, to remain in contact with them as Brian's health began to fail, and to contact them at the time of his death has been their greatest commitment to MLIV science yet. And to the Wiens it also represents a deeply meaningful commitment to Brian of allowing him to continue to give and have great meaning even after his passing. Nannette feels strongly that "Brian is the real hero here. He is going to continue to give in so many ways and live on in ways that we don't even know right now."

Dr. Steven Walkley, professor of neuroscience and pathology at the Albert Einstein College of Medicine and researcher on MLIV, further illuminates these sentiments:

In the past, it was standard practice to perform studies on children who passed away from rare diseases.  In fact, much of our current knowledge about these disorders grew out of this early work.

Donating a loved one's tissues after death is a way to advance knowledge in a special way.  Tissue donation has the potential to serve others, to enable understanding of disease, and hopefully to treat these diseases in the future.  It brings a sense of purpose and meaning to the tragedy we've suffered.  It won't bring our loved one back, but in a way, if it benefits others, it will help keep their memory alive.

Mike and Nannette recognize that every family encounters the death of their child in the most deeply personal way and that each family is guided by the teaching and traditions of family and faith in how they manage that experience. The Wiens are deeply grieving Brian's loss and coming to terms with what they have been through. However, they are also deeply comforted by the decision they have made. They are awed by the immediate purpose science can make of Brian's body and by the notion that, in this way, he will help and heal.

For more information, or to register as a donor, see: University of Maryland School of Medicine - Brain and Tissue Bank